Skip to content
Seismic waves are the waves of energy caused by the sudden breaking of rock within the earth or an explosion. They are the energy that travels through the earth and is recorded on seismographs. 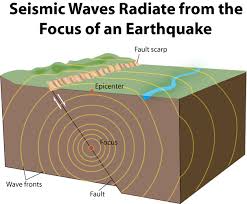 BODY WAVES.
These are waves that travel through the surface of the earth.
(a) Primary waves.
They cause each crustal rock to move back and forth along the direction of the Wave movement. They are also the fastest waves.
(b) Secondary waves.
Referred to as shake or shear waves since they cause the crustal rock particles to vibrate vertically to the direction of the waves movement.
Surface waves.
They travel on the surface of the earth and are responsible from a third set of impulses.Surface waves are divided into love waves and LRayleigh waves
Love Waves

The first kind of surface wave is called a Love wave, named after A.E.H. Love, a British mathematician who worked out the mathematical model for this kind of wave in 1911. It’s the fastest surface wave and moves the ground from side-to-side. Confined to the surface of the crust, Love waves produce entirely horizontal motion

Description of waves
MEASUREMENT OF EARTH QUAKES
The strength of an earth quake is measured by its intensity and magnitude
Intensity is the measure if how strong or hard the earthquake shakes the ground. It is measured using the Mercalli scale by noting the earth quakes effects in people, buildings etc
Magnitude is the measure of amount if energy given off by an earthquake. It is measured on the Richter scale. An earthquake of magnitude four gives ten times as much energy as one of magnitude three. The Richter scale ranges from 0-8.9

1 thought on “TYPES OF EARTHQUAKE WAVES”