Skip to content
Mass wasting, also known as slope movement or mass movement, is the geomorphic process by which soil, sand, regolith, and rock move down slope typically as a mass, largely under the force of gravity, but frequently affected by water and water content as in submarine environments and mudslides. 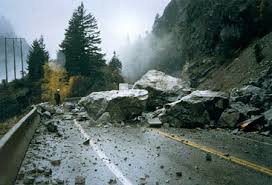