A variable is any entity that can take on different values. Anything that can vary can be considered a variable.

For instance, age can be considered a variable because age can take different values for different people or for the same person at different times.

types of variables in research

The presumed cause in an experimental study. All other variables that may impact the dependent variable are controlled.

Strictly speaking, “dependent variable” should not be used when writing about non-experimental designs. 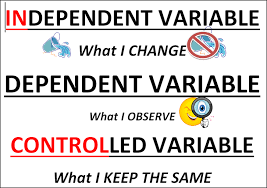 A variable that is not restricted to particular values (other than limited by the accuracy of the measuring instrument). E.g., reaction time, neuroticism, IQ. Equal size intervals on different parts of the scale are assumed, if not demonstrated.

A variable that is an inherent part of the system being studied and that is determined from within the system.

A variable that is caused by other variables in a causal system.

A variable entering from and determined from outside of the system being studied. A causal system says nothing about its exogenous variables.

Intervening variable A variable that explains a relation or provides a causal link between other variables. Also called by some authors “mediating variable” or “intermediary variable.” Example:

The statistical association between income and longevity needs to be explained because just having money does not make one live longer.

Other variables intervene between money and long life. People with high incomes tend to have better medical care than those with low incomes. Medical care is an intervening variable.

It mediates the relation between income and longevity.

A variable that obscures the effects of another variable. If one elementary reading teacher used a phonics textbook in her class and another instructor used a whole language textbook in his class, and students in the two classes were given achievement tests to see how well they read, the independent variables (teacher effectiveness and textbooks) would be confounded.

There is no way to determine if differences in reading between the two classes were caused by either or both of the independent variables.

4 thoughts on “2 TYPES OF VARIABLES IN RESEARCH”