The earth is composed of three internal, concentric layers of increasing densities. These layers are the crust, mantle, and core. They are made up of different layers of rocks, with their densities increasing towards the center of the Earth. That is densities of rocks that make up the earth increase as you move from the surface towards the interior.

This is the outermost part of the earth. It consists of silica and aluminum (sial). It forms the upper layer of the continent and is mostly composed of granite rocks. The layer below SIAL is called SIMA. This layer is made of silica and manganese. It is a layer of basaltic rocks which are denser and underlies the continental block to form the ocean floor. 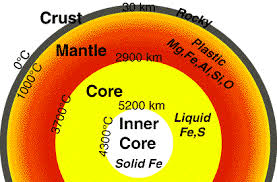 This is the layer below the crust. It is composed of iron and manganese. It lies between the crust and the core. The layer which separates crust and mantle is called Mohorovic discontinuity. The mantle is made up of very dense and hot igneous rocks, found in semi-liquid states. It extends downwards 2900 km and the temperature ranges between 5000 °C and 7000 °C. The density of the mantle is 3 – 3.3 g/cm3. It is divided into two parts namely, the upper and lower mantle. The upper mantle is rigid and combines with the crust to form a layer called the lithosphere. Below the upper mantle, there is a layer called the asthenosphere.

This is the innermost layer of the earth. It is composed of nickel and iron. Its diameter is approximately 2500 – 2700 km and its temperature is around 5500°C. The average density of the barysphere is about 5.2 g/cm3. Most geographers believe that the core is divided into solid and liquid core. The total mass of the earth is about 5.976 x 1021 tones.
The core is made of two layers: the outer core, which borders the mantle, and the inner core. The boundary separating these regions is called the Bullen discontinuity.

The hottest part of the core is actually the Bullen discontinuity, where temperatures reach 6,000° Celsius (10,800° Fahrenheit)—as hot as the surface of the sun.

The temperature of the inner core is far above the melting point of iron. However, unlike the outer core, the inner core is not liquid or even molten. The inner core’s intense pressure—the entire rest of the planet and its atmosphere—prevents the iron from melting. The pressure and density are simply too great for the iron atoms to move into a liquid state. Because of this unusual set of circumstances, some geophysicists prefer to interpret the inner core not as a solid, but as plasma behaving like a solid.

1 thought on “The internal structure of the earth”