Skip to content
The International Date Line (IDL) is an imaginary line of longitude on the Earth’s surface located at about 180 degrees east (or west) of the Greenwich Meridian. The date line is shown as an uneven black vertical line in the Time Zone Map above and marks the divide where the date changes by one day.
In 1519, Ferdinand Magellan set out westward from Spain, sailing for East Asia with 241 men in five ships. Three years later, the remnants of his crew (18 men in one ship) successfully completed the first circumnavigation of the globe. Although a careful log had been kept, the crew found that their calendar was one day short of the correct date. This was the first human experience with time change on a global scale, the realization of which eventually led to the establishment of the International Date Line.
One advantage of establishing the Greenwich meridian as the prime meridian is that its opposite arc is in the Pacific Ocean. The 180th meridian, transiting the sparsely populated mid-Pacific, was chosen as the meridian at which new days begin and old days exit from the surface of Earth. The International Date Line deviates from the 180th meridian in the Bering Sea to include all of the Aleutian Islands of Alaska within the same day and again in the South Pacific to keep islands of the same group (Fiji, Tonga) within the same day (Figure 1-34). The extensive eastern displacement of the date line in the central Pacific is due to the widely scattered locations of the many islands of the country of Kiribati. The International Date Line is in the middle of the time zone defined by the 180° meridian. Consequently, there is no time (i.e., hourly) change when crossing the International Date Line—only the calendar changes, not the clock. When you cross the International Date Line going from west to east, it becomes one day earlier (e.g., from January 2 to January 1); when you move across the line from east to west, it becomes one day later (e.g., from January 1 to January 2). 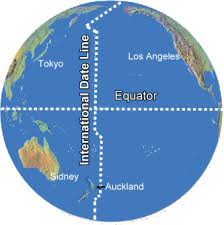 The time difference between either side of the International Date Line is not always exactly 24 hours because of local time zone variations.If you travel around the world, changing standard time by one hour each time you enter a new time zone, then a complete circuit would mean that you adjusted your clock or watch time by 24 hours. This would lead to a difference of one day between the date on your clock and the real calendar date. To avoid this, countries are on either side of the International Date Line which runs down the middle of the Pacific Ocean. If you cross the date line moving east, you subtract a day, whereas if you are moving west you add a day.