Skip to content
The ozone layer or ozone shield refers to a region of Earth’s stratosphere that absorbs most of the Sun’s ultraviolet (UV) radiation. It contains high concentrations of ozone (O3) relative to other parts of the atmosphere, although still very small relative to other gases in the stratosphere. 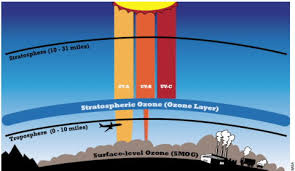 Reductions in stratospheric ozone levels will lead to higher levels of UVB reaching the Earth’s surface. The sun’s output of UVB does not change; rather, less ozone means less protection, and hence more UVB reaches the Earth. Studies have shown that in the Antarctic, the amount of UVB measured at the surface can double during the annual ozone hole. Another study confirmed the relationship between reduced ozone and increased UVB levels in Canada during the past several years.

The following are effects of depletion of ozone layer

1 thought on “Health and environmental effects of ozone layer destruction.”