Skip to content
Standard time is the synchronization of clocks within a geographical area or region to a single time standard, rather than using solar time or a locally-chosen meridian (longitude) to establish a local mean time standard.For millennia, people have measured time based on the position of the sun; it was noon when the sun was highest in the sky. Sundials were used well into the Middle Ages, at which time mechanical clocks began to appear. Cities would set their town clock by measuring the position of the sun, but every city would be on a slightly different time.
As the telegraph and railroad began to speed words and passengers between cities, the use of local solar time created
increasing problems. A cross-country rail traveler in the United States in the 1870s might have experienced
as many as 24 different local time standards between the Atlantic and Pacific coasts.
Eventually, the railroads stimulated the development of a standardized time system. At the 1884 International Prime Meridian Conference in Washington, D.C., countries agreed to divide the world into 24 standard time zones, each extending over 15° of longitude. The mean local solar time of the Greenwich (prime) meridian was chosen as the standard for the entire system. The prime meridian became the center of a time zone that extends 7.5° of longitude to the west and 7.5° to the east of the prime meridian. Similarly, the meridians that are multiples of 15° both east and west of the prime meridian, were set as the central meridians for the 23 other time zones.
Although Greenwich Mean Time (GMT) is now referred to as Universal Time Coordinated (UTC), the prime meridian is still the reference for standard time. Because it is always the same number of minutes after the hour in all standard time zones (keeping in mind that a few countries, such as India, do not adhere to standard one-hour-interval time zones), to know the exact local time, we usually need to know only how many hours later or earlier our local time zone is compared to the time in Greenwich. Figure  shows the number of hours later or earlier than UTC it is in each time zone of the world.
Most of the countries of the world are sufficiently small in their east–west direction so as to lie totally within a single time zone. However, large countries may encompass several zones: Russia occupies nine time zones; including Alaska and Hawai‘i, the United States spreads over six ; Canada, six; and Australia, three. In international waters, time zones are defined to be exactly 7°30´ to the east and 7°30´ to the west of the central meridians. Over land areas, however, zone boundaries vary to coincide with appropriate political and economic boundaries. For example, continental Europe from Portugal to Poland shares one time zone, although longitudinally covering about 30°. At the extreme, China extends across four 15° zones, but the entire nation, at least officially, observes the time of the 120° east meridian, which is the one closest to Beijing. In each time zone, the central meridian marks the location where clock time is the same as mean Sun time (i.e., the Sun reaches its highest point in the sky at 12:00 noon). On either side of that meridian, of course, clock time does not coincide with Sun time. The deviation between the two is shown for one U.S. zone in. From the map of time zones of the United States, we can recognize a great deal of manipulation of the time zone boundaries for economic and political convenience. For example, the Central Standard Time Zone, centered on 90° W extends all the way to 105° W (which is the central meridian of the Mountain Standard Time Zone) in Texas to keep most of that state within the same zone. By contrast, El Paso, Texas, is officially within the Mountain Standard Time Zone in accord with its role as a major market center for southern New Mexico, which observes Mountain Standard Time. In the same vein, northwestern Indiana is in the Central Standard Time Zone with Chicago. 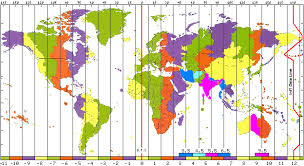