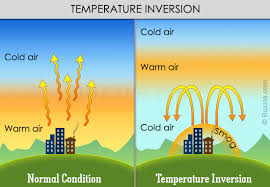 Normally, temperature decreases with increase in elevation. It is called normal lapse rate. At times, the situations is reversed and the normal lapse rate is inverted. It is called Inversion of temperature. Inversion is usually of short duration but quite common nonetheless. A long winter night with clear skies and still air is ideal situation for inversion. The heat of the day is radiated off during the night, and by early morning hours, the earth is cooler than the air above. Over polar areas, temperature inversion is normal throughout the year. Surface inversion promotes stability in the lower layers of the atmosphere. Smoke and dust particles get collected beneath the inversion layer and spread horizontally to fill the lower strata of the atmosphere. Dense fogs in mornings are common occurrences especially during winter season. This inversion commonly lasts for few hours until the sun comes up and beings to warm the earth. The inversion takes place in hills and mountains due to air drainage. Cold air at the hills and mountains, produced during night, flows under the influence of gravity. Being heavy and dense, the cold air acts almost like water and moves down the slope to pile up deeply in pockets and valley bottoms with warm air above. This is called air drainage. It protects plants from frost damages.

Normally, air temperature decreases at a rate of 3.5°F for every 1000 feet (or roughly 6.4°C for every kilometer) you climb into the atmosphere. When this normal cycle is present, it is considered an unstable air mass and air constantly flows between the warm and cool areas. As such the air is better able to mix and spread around pollutants.During an inversion episode, temperatures increase with increasing altitude. The warm inversion layer then acts as a cap and stops atmospheric mixing. This is why inversion layers are called stable air masses.
Temperature inversions are a result of other weather conditions in an area. They occur most often when a warm, less dense air mass moves over a dense, cold air mass.

This can happen for example, when the air near the ground rapidly loses its heat on a clear night. In this situation, the ground becomes cooled quickly while the air above it retains the heat the ground was holding during the day. Additionally, temperature inversions occur in some coastal areas because upwelling of cold water can decrease surface air temperature and the cold air mass stays under warmer ones.

Topography can also play a role in creating a temperature inversion since it can sometimes cause cold air to flow from mountain peaks down into valleys. This cold air then pushes under the warmer air rising from the valley, creating the inversion. In addition, inversions can also form in areas with significant snow cover because the snow at ground level is cold and its white color reflects almost all heat coming in. Thus, the air above the snow is often warmer because it holds the reflected energy.

Some of the most significant consequences of temperature inversions are the extreme weather conditions they can sometimes create. One example of these is freezing rain. This phenomenon develops with a temperature inversion in a cold area because snow melts as it moves through the warm inversion layer. The precipitation then continues to fall and passes through the cold layer of air near the ground. When it moves through this final cold air mass it becomes “super-cooled” (cooled below freezing without becoming solid). The super-cooled drops then become ice when they land on items like cars and trees and the result is freezing rain or an ice storm.Intense thunderstorms and tornadoes are also associated with inversions because of the intense energy that is released after an inversion blocks an area’s normal convection patterns.

Although freezing rain, thunderstorms, and tornadoes are significant weather events, one of the most important things impacted by an inversion layer is smog. This is the brownish gray haze that covers many of the world’s largest cities and is a result of dust, auto exhaust, and industrial manufacturing.Smog is impacted by the inversion layer because it is in essence, capped, when the warm air mass moves over an area. This happens because the warmer air layer sits over a city and prevents the normal mixing of cooler, denser air. The air instead becomes still and over time the lack of mixing causes pollutants to become trapped under the inversion, developing significant amounts of smog.
During severe inversions that last over long periods smog can cover entire metropolitan areas and cause respiratory problems for the inhabitants of those areas. In December 1952, for example, such an inversion occurred in London. Because of the cold December weather at the time, Londoners began to burn more coal, which increased air pollution in the city. Since the inversion was present over the city at the same time, these pollutants became trapped and increased London’s air pollution. The result was the Great Smog of 1952 that was blamed for thousands of deaths.
Like London, Mexico City has also experienced problems with smog that have been exacerbated by the presence of an inversion layer. This city is infamous for its poor air quality but these conditions are worsened when warm sub-tropical high pressure systems move over the city and trap air in the Valley of Mexico. When these pressure systems trap the valley’s air, pollutants are also trapped and intense smog develops. Since 2000, Mexico’s government has developed a ten year plan aimed at reducing ozone and particulates released into the air over the city.
London’s Great Smog and Mexico’s similar problems are extreme examples of smog being impacted by the presence of an inversion layer. This is a problem all over the world though and cities like Los Angeles, California; Mumbai, India; Santiago, Chile; and Tehran, Iran, frequently experience intense smog when an inversion layer develops over them.
Because of this, many of these cities and others are working to reduce their air pollution. To make the most of these changes and to reduce smog in the presence of a temperature inversion, it’s important to first understand all aspects of this phenomenon, making it an important component of the study of meteorology, a significant sub-field within geography. 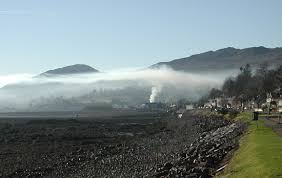