Skip to content
There are two ingredients needed for clouds to become visible; water, of course, and nuclei.
Nuclei – In one form or another water is always present in the atmosphere. However, water molecules in the atmosphere are too small to bond together for the formation of cloud droplets.They need a “flatter” surface, an object with a radius of at least one micrometer (one millionth of a meter) on which they can form a bond. Those objects are called nuclei.
Nuclei are minute solid and liquid particles found in abundance. They consist of such things as smoke particles from fires or volcanoes, ocean spray or tiny specks of wind-blown soil. These nuclei are ‘hygroscopic’ meaning they attract water molecules.
Called “cloud condensation nuclei”, these water molecule attracting particles are about 1/100th the size of a cloud droplet upon which water condenses.
Therefore, every cloud droplet has a speck of dirt, dust or salt crystal at its core. But, even with a condensation nuclei, the cloud droplet is essentially made up of pure water. 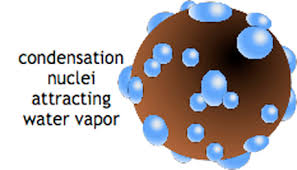 But having water attracting nuclei is not enough for a cloud to form as the air temperature needs to be below the saturation point. Called the dew point temperature, the point of saturation is where evaporation equals condensation.
Therefore, a cloud results when a block of air (called a parcel) containing water vapor has cooled below the point of saturation.
Air can reach the point of saturation in a number of ways. The most common way is through lifting of air from the surface up into the atmosphere.
As a bubble of air, called a parcel, rises it moves into lower pressure since pressure decreases with height. The result is the parcel expands in size as it rises. This requires heat energy to be removed from the parcel. Called an adiabatic process, as air rises and expands it cools.
The rate at which the parcel cools with increasing elevation is called the “lapse rate”. The lapse rate (the rate the temperature lapses or decreases) of unsaturated air (air with relative humidity
lapse rate, for each 1000 feet increase in elevation, the air temperature will decrease 5.4°F.
Once the parcel reaches saturation temperature (100% relative humidity) water vapor will condense onto the cloud condensation nuclei resulting in the formation of a cloud droplet.
But the atmosphere is in constant motion. As air rises drier air is added (entrained) into the rising parcel so both condensation and evaporation are continually occurring. So cloud droplets are constantly forming and dissipating.
Therefore, clouds form and grow when there is more condensation on nuclei than evaporation from nuclei. Conversely, they dissipate if there is more evaporation than condensation. Thus clouds appear and disappear as well as constantly change shape.


RELATED POSTS.
Instruments and items found in every weather station.