While clouds appear in infinite shapes and sizes they fall into some basic forms. From his Essay of the Modifications of Clouds (1803) Luke Howard divided clouds into three basic categories; cirrus, cumulus and stratus.

The Latin word ‘cirro’ means curl of hair. Composed of ice crystals, cirro-form clouds are whitish and hair-like. There are the high, wipsy clouds to first appear in advance of a low pressure area such as a mid-latitude storm system or a tropical system such as a hurricane. 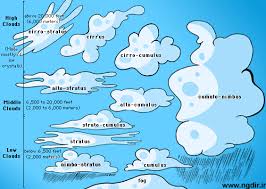 Generally detached clouds, they look like white fluffy cotton balls. They show vertical motion or thermal uplift of air taking place in the atmosphere. They are usually dense in appearance with sharp outlines. The base of cumulus clouds are generally flat and occurs at the altitude where the moisture in rising air condenses.

From the Latin word for ‘layer’ these clouds are usually broad and fairly wide spread appearing like a blanket. They result from non-convective rising air and tend to occur along and to the north of warm fronts. The edges of strato-form clouds are diffuse.

Howard designated a special rainy cloud category which combined the three forms Cumulo + Cirro + Stratus. He called this cloud, ‘Nimbus’, the Latin word for rain. The vast majority of precipitation occurs from nimbo-form clouds and therefore these clouds have the greatest vertical height.

Combinations of the Core Four

Based on his observations, Howard suggested there were modifications (or combinations) of these core clouds between categories. He noticed that clouds often have features of two or more categories; cirrus + stratus, cumulus + stratus, etc. His research served as the starting point for the ten basic types of clouds we observe today.
From the World Meteorological Organization’s (WMO) International Cloud Atlas these clouds are Altocumulus, Altostratus, Cirrus, Cirrocumulus, Cirrostratus, Cumulonimbus, Cumulus, Nimbostratus, Stratocumulus and Stratus.

By convention, clouds are vertically divided into three étages (levels); low, middle, and high. Each étage is defined by the range of levels at which each type of cloud typically appears.

Divided by their height the ten types of clouds are

2 thoughts on “The core 4 types of cloud forms.”