The technical definition of the vertical aerial photograph is photography looking down on a subject at an angle of less than or equal to three degrees from the vertical. 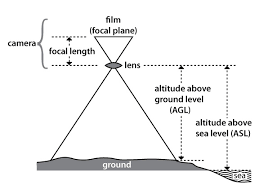