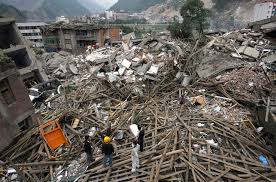 Earthquakes cause many different kinds of damage depending on:

A given Richter reading will produce vastly different amounts of damage in different parts of the world. Even the same quake can have very different effects in neighboring areas. Many areas much closer to the quake suffered only minimal damage. 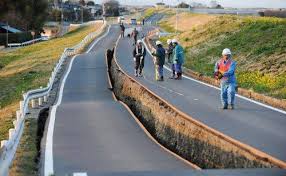 The combination of uncompacted soil with a lot of water in it led to a phenomenon called liquefaction. Liquefaction occurs when the ground loses its cohesion and behaves like a liquid. When this happens during an earthquake it can result in increased intensity of the shaking, or landslides. It can also cause collapse of buildings. Another factor that has a major effect on the damage is the building method and materials used. Unreinforced masonry has the worst record since it has little ability to flex or move without collapsing. Wood frame buildings, or reinforced buildings, on the other hand, can hold together under quite severe shaking