Skip to content
Tanzania is home to some of Africa’s most famous national parks and the majestic Mount Kilimanjaro rising above the Serengeti. Most visitors will find themselves passing through Dar es Salaam and heading out on safaris and various wildlife viewing adventures. For those who want to take a break and spend some time soaking up the sun, the beautiful beaches of Zanzibar beckon. Off Pemba and Mafia islands is a whole other kind of natural wonder, one most appreciated by the scuba divers and snorkelers who come here from around the world to experience the coral gardens, colorful fish, and crystal clear waters.

One of the most frequented attractions in Tanzania, Mount Kilimanjaro National Park is home to Africa’s highest mountain peak. Unlike other parks in northern Tanzania, this one is not visited for the wildlife but for the chance to stand in awe of this majestic snow-capped mountain and, for many, to climb to the summit. Mount Kilimanjaro can be climbed at any time, although the best period is from late June to October, during the dry season.

Kilimanjaro, a World Heritage Sites, was formed over 1 million years ago by volcanic movement along the Rift Valley. Three points – Shira, Kibo, and Mawenzi came to be about 750,000 years ago. The highest point is Uhuru Peak on Kibo, which is one of the Seven Summits of the world.

The mountain rises from farmland on the lower level to rainforest and alpine meadow and then barren lunar landscape at the peaks. The slopes of the rainforest are home to buffaloes, leopards, monkeys, elephants and eland. The alpine zone is where bird watchers will find an abundance of birds of prey. 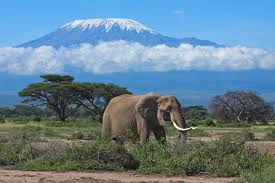 Serengeti National Park is a vast treeless plain with thousands, even millions of animals searching for fresh grasslands. As the largest national park in Tanzania, the Serengeti attracts thousands of tourists each year. The best months for wildlife viewing are between December and June. The wet season is from March to May, with the coldest period from June to October. The annual migration of millions of zebra and wildebeest takes place in May or early June. This migration is one of the most impressive natural events and the primary draw for many tourists.
Large herds of antelope as well as lion, leopard, cheetah, hyena, bat eared fox, hunting dog and jackal are also found in Serengeti National Park. Nearly 500 species of bird have been recorded on the Serengeti. Many of these are attracted to the swamp area. ‘Serengeti’ means an ‘extended place’ in the Maasai language. 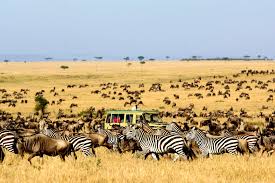 The Zanzibar archipelago consists of the islands of Zanzibar and Pemba. The island of Zanzibar, also called Unguja, is a major holiday destination known for its beautiful beaches. This island has some of the best beaches in the world with varying surf depending on what side of the island you are on. Visitors will find soft white sand and clear shallow water, along with traditional boats. Stone Town is located in the heart of Zanzibar and features old Arabian townhouses, narrow alleyways and a busy port.

Located between the Serengeti and Lake Manyara, the Ngorongoro Conservation Area is home to the famous volcanic Ngorongoro Crater and one of Tanzania’s most popular wildlife viewing areas. This huge volcanic crater has a permanent supply of water which draws all kinds of animals who stay in this area rather than migrating. Visitors come here primarily for viewing large game and bird watching, but also of interest in the conservation area is the Olduvai Gorge. This important archeological site has revealed ancient skull and bone fragments that have delivered critical information about early mankind.

The Ngorongoro Crater is the largest intact ancient caldera in the world, nearly three million years old. The Ngorongoro volcano was one of the world’s tallest mountains before it exploded and collapsed. Thousands of wild game can be seen on the crater floor, including lions, elephants, rhinos, Thomson’s gazelles, and buffaloes, but wildebeests and zebras account for over half of the animals that call the Ngorongoro Crater home. Bird watching is superb, especially around Lake Migadi, which attracts flocks of flamingoes to the shallows. Hippos are content to submerge themselves during the day and then graze in the nearby grass in the evening. 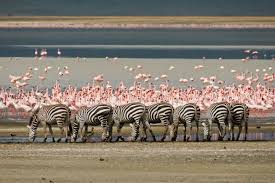 Selous Game Reserve.
Selous is the largest game reserve in Africa. Established in 1922, it covers 5% of Tanzania’s total area. The southern area is a forbidden zone that is undeveloped, heavily forested, and contains a series of steep cliffs. Travelers are limited to the area north of the Rufiji River. This area of the Selous Game Reserve has large open grassland, woodlands, rivers, hills and plains. The best time to visit is July through October.
The Rufiji River bisects the Selous Game Reserve and has the largest catchment area of any river in East Africa. The river is an important feature of the reserve providing the opportunity to watch the diverse water-based wildlife. A broad range of game can be found including elephants, hippos and rhinos as well as buffalo, antelope, giraffe, warthog, wildebeest, lion, leopard and cheetah. The diversity of bird life in Selous includes over 350 recorded species. 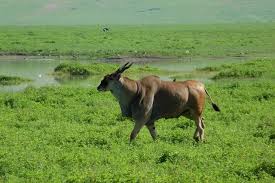