Skip to content
Francis Bacon (in 1620) was the first to formally draw attention to the fact that the continents could be fitted together like a jigsaw puzzle. In the early twentieth century, both Alfred Wegener (Germany) and F.B. Taylor (USA) came independently to same idea, that continents were not static, but were drifting. However, the concept of continental drift usually attributed to Alfred Wegener. Wegener suggested that there was once one large super continent, which he named Pangea. From the Carboniferous (250 million years ago) until some time in the Quaternary (from 2.5 million years ago), this broke up, first splitting into Laurasia in the north and Gondwanaland in the south, before forming the continental configurations that we know today. Wegener drew evidence from several sciences to support this theory.
Biology
Geology
Climatology

However, Wegener’s theory was rejected at first, mainly because he was unable to explain a driving mechanism that would force the continents to drift apart.

In the 1950s, scientists began to study palaeomagnetism – as molten lava cools at the surface of the Earth’s crust, the minerals contained within it (especially iron) align themselves with the magnetic pole. Although the Earth’s magnetic pole was already known to vary on an annual
basis, it was discovered that periodically, the magnetic pole actually reversed completely (during the past 76 million years, there are thought to have been 171 reversals). As new lava was being extruded from the submarine volcanoes, the minerals contained within it would therefore align themselves according to the direction of the magnetic pole, and would thus contain a record of the Earth’s magnetic polarity. This magnetic striping was found to be virtually symmetrical either side of the Mid Atlantic Ridge.

In 1962, while investigating islands in the mid-Atlantic, American oceanographer Maurice Ewingdiscovered a continuous submarine mountain range extending the entire longitudinal length of the Atlantic sea floor. He also noted that the rocks were of volcanic origin, and geologically young (not ancient, as previously assumed). What he had actually discovered was in fact the Mid Atlantic Ridge.
Also in 1962, there was the discovery that the sea floor was spreading. While studying the age of rocks from the edge of the North American coast to the middle of theAtlantic Ocean, American geologist Harry Hess discovered that the rocks became progressively younger towards the Mid
Atlantic Ridge. He confirmed that the newest rocks were still being formed in Iceland, and that the Atlantic could be widening by up to 5 cm per year. 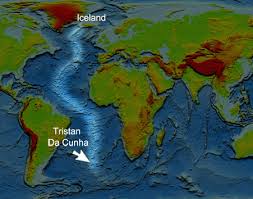 However, if new crust was being formed at the Mid Atlantic Ridge, yet the Earth was not expanding in size, evidence was needed to suggest that the crust must be being destroyed elsewhere. This was found to be so around the margins of the Pacific, and thus the now virtually universally accepted theory of plate tectonics was born.

The theory of plate tectonics.