Airmass is a large volume of air in the atmosphere that is mostly uniform in terms of temperature and moisture.

Air masses cover many hundreds or thousands of square miles and adopt the characteristics of the surface below them.

They are classified according to latitude and their continental or maritime source regions.

There are four temperature characteristics defining the airmass source region, from the coldest to warmest

Therefore the air mass that develops over northern Canada is called a continental polar air mass and it is cold and dry. One that forms over the Indian ocean is called a maritime tropical air mass and is warm and humid. 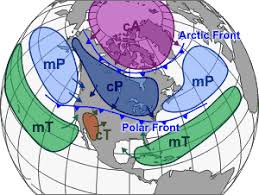 5 thoughts on “CLASSES AND PROCEDURES USED TO CLASSIFY AIRMASSES”