Skip to content
Wetlands is the land area that is saturated with water, either permanently or seasonally, such that it takes on the characteristics of distinct ecosystem.

Wetlands can be grouped into the following categories:

Bogs and fens, a bog is freshwater wetland usually formed in old glacial lake with spongy peat base. Most of the bog water comes from rain. A fen is a freshwater peat wetland covered mostly by grasses, sedges and reeds of high PH (alkaline) groundwater. Soil in bogs is low in nutrients. 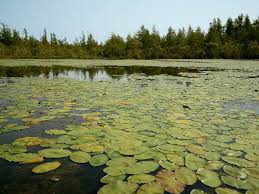 Marshes, these are areas with shallow water that are mostly grasslands.Marshes can be freshwater or salt water and the amount of water in the marshes can also change without tides. Fresh water marshes have soft stemmed and herbaceous plants like grasses, shrubs and wildflowers. Marshes are home to animals including beavers, alligators and newt. Marshes have soil which is low in mineral content. They can be found along edges of lakes rivers and along coastline, inlets and estuaries.

Swamps, these are slow moving streams, rivers or isolated low lying areas with more open and deeper water than marshes. Plants found in the swamps include trees such as cypress trees in freshwater swamps and mangrove in salt water swamps. Swamps have more of woody shrubs than grasses and herbs. Swamps are found in low lying areas near river or coastal areas. Swamps soil is poorly drained and water logged.