Vulcanism refers to movement of molten magma toward or onto the earth’s surface. Igneous intrusive features are features formed when magma cool and solidify within the earth’s crust.

The following are feature resulting from intrusive igneous activities :

Dyke, this is sheet of of rock that is formed in the fracture in the pre – existing rock. Dyke form when a mass of magma cuts across the bedding planes and forms a wall like structure. Example of dyke is one that is found in Jos plateau in Nigeria this has been exposed to the surface  through erosion. 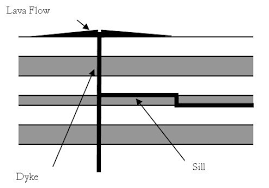 Sill, this is formed when a sheet of magma lies along the bedding planes of the earth’s surface. A sill is therefore a horizontal sheet of rock that solidifies from magma that has been injected concordantly between bedding planes; they may be of any thickness and extend for many square of kilometers. Example of sill is a great Whill sill in great Britain.

Batholith, is large body of intrusive igneous rock believed to have been crystallized at the considerable depth below the earth’s surface.. They are the largest type of pluton. Example of batholith is Idaho batholith which cover surface area of over 15500 kilometer square.

Lopoliths these are saucer – shaped features formed beneath the earth’s surface through magma intrusion. Lopolith forms great shallow basin when magma solidifies within the crust a good example is bush veld igneous complex of south Africa which is composed of both granite and basic rock. 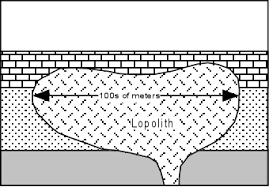 Laccolith, this is a sheet intrusion that has been injected between two layers of sedimentary rock. The pressure of magma is powerful enough that the overlying strata are forced upward giving laccolith a dome or mushroom like form with generally planar base. Some laccolith can be found in Madagascar and Utah USA where they has been exposed by erosion.

Phacolith, this is lens shaped pluton that occupy either the crest of an anticline or trough of syncline. A good example of phacolith can be seen seen in Corndon hills in Shropshire United Kingdom.