Explain with aid of diagram features formed by wave deposition

The following are features formed by wave deposition
·        Beach, this is accumulation of sand, shingles and pebbles at the coast. It is caused by deposition process of the wave when the swash is stronger than backwash.
·        Spit, this is narrow ridge like accumulation of the sand or deposited materials that protrude into the sea and is attached to the mainland.
·        Cuspate foreland, this is formed when two spits converge and join at the tips and it is triangular in shape.
·        Lagoon, this is accumulation of water formed by sea water accumulating behind cuspate fore-land.
·        Tombolo, this is the spit that connects mainland to the island.
·      Sand  bar, this is the ridge of materials usually the sand, which lies parallel or almost parallel to the coast. Unlike the spit the bar is not attached to the mainland. 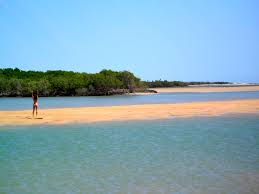 ·        Mudflats, is the platform of mud formed by deposition of silt and river alluvium along the gently sloping coast, especially in bays and estuaries