The following are landforms that can result from the faulting process.

This is a raised highland,  fault bordered block which occurs due to raising up of block during faulting. Uplifted or raised blocks may be tilted to form a tilted block or maybe horizontal to form Horst. Example of block mountains includes mountain such as the black forest in German and Ruwenzori in Uganda.

it is major landforms, resulting from the lowering of a relatively narrow strip of rock between parallel faults. The most impressive rift valley system in the world is the great rift valley of Africa which extends for over 7600 km from near to Beira in Mozambique to the gulf of Aquaba into Jordan.. rift valley can be formed by both tension and compression forces. 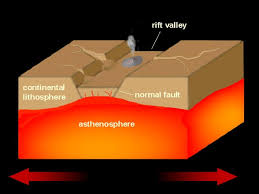 These form when a series of parallel faults develop in the region and land between these faults is uplifted at different levels. The landscape forms a series of fault scarp that looks like steps. a good example can be seen at Kijabe west of Nairobi and the Malawi rift

These features result from the warping o the earth’s crust. Uplifted areas due to wrapping which have a high level of undulating landforms are called plateaus while depressed areas form basins. Examples of plateaus and basins include the Lake Victoria basin in East Africa  Deccan plateau and the Bolivian plateau 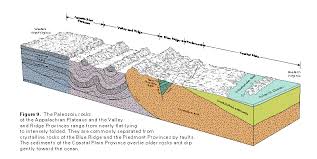 To sum up, the faulting process  is one of the processes of endogenic geomorphology and is caused by things like tectonic plate movement, earthquake and volcanic eruption