b)      Explain the effects of soil erosion

c)      Suggest  the measures to be taken to control soil erosion

ANSWER:
a)      Soil erosionis the process by which the top soil is detached and carried away by various agents such as water and wind, at the rate that is faster than it is being replaced by soil forming processes
b)      Soil erosion is serious problem which has many effects on both the physical and human environment. Some of these effects are explained hereunder
Soil erosion lead to loss of productive topsoil forever and only unproductive stony soil is left behind. This lower agricultural productivity of the land. For example large part of Dodoma region in Tanzania has become unproductive due to severe soil erosion which has occurred there.
The soil left behind after the erosion is thin and cannot hold plants firmly in the ground. The plants are easily uprooted and blown away by wind. They could also be washed away are buried in the deposited soil. Structures such as building and bridges may be destroyed as the result of erosion. This happen when the soil around them is eroded thus weakens their foundation.
When gullies are deepened up to or near water table underground water is exposed. Some of it evaporates and others flow away. This causes water table to be lowered. as the result plant with shorter root cannot survive as they are unable to reach the water.
Sand which is eroded from the steep slopes is deposited on the riverbed from which it is scooped for construction purpose this is very common in Tanzania.
Sediments which are carried into rivers, lakes and oceans may contain chemical pollutants from the farms and dumping grounds. These pollutants may kill aquatic life such as fish, coral polyps and plants. The water may also become unfit for human and animals consumption. In addition, excessive sedimentation in mangrove swamps may destroy mangrove vegetation.
Soil erosion also cause water reservoir which has been constructed along some rivers to be filled up with soil sediments. As the result their lifespan and usefulness is greatly reduced. Similarly increased alluvial deposits on riverbed make the river channel to become shallow which result into frequent flooding. 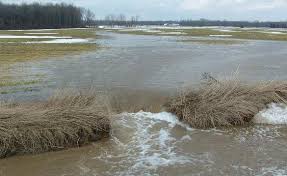 Last but not least, the continued loss of soil through wind and water erosion leads to destruction of vegetation cover. This may eventually turn the affected area into a semi desert region and finally into desert. This effect can be seen in the central part of Tanzania
c)      The following are ways which can be used to control soil erosion problem